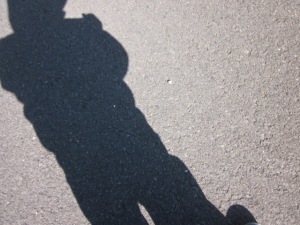 When my son was three years old, we traveled to Japan where they treated him like the little Prince that he believes himself to be.  Being that current times are those in which precocious kids rule, we gave him a camera and told him to have fun with it. He stopped people in the street, pointed the camera and they would readily pose. While he discovered the art of the angle, he also discovered something else: himself.  He would point the camera at himself and giggle.  We walked and he giggled some more. He then noticed his shadow and its ebbs and flows. Fascinated by the forms and moves, he would pose his shadow for the camera. This is his very first shadow selfie.

Once he got the hold of how the shadow selfie works, he couldn’t get enough of posing for his own photos.