I have a lot of wanderlust. I’ve been talking about it non-stop for weeks. I was at a local coalition meeting recently where I proudly noted I try to go to at least two countries a year. I wish I could do more but my son’s school schedule alongside my work schedule tend to get in the way of my wanderlust. When I noted my travel desires someone laughingly noted that they had only been to two countries in tbeir whole life time: Mexico and Canada. Which, honestly, in my book is not really foreign. Anyway, I love both of those countries. I’ve even done a cross-Canada trip. I feel at home. But I felt a bit silly when the person noted their travels in comparison to mine.

Thus, this weekend I focused on my local community. While I am a die-hard New Yorker, I recognize there is plenty to explore in southern California.
I started off my Saturday prepping my son for a rally. He dressed up in a spiffy hat and we got into uber to our starting point.
Over 17,000 steps later, I have blisters, a cool video of my son at the head of a march and fun photos of my son slipping and sliding down a giant slide at a Redondo beach carnival. Two completely different types of events in one day. Two worlds apart right here in our backyard.

We attended a march that commerated the 25th anniversary of the South LA Riots after the verdict in the Rodney King court case. It was the verdict that brought to a boil what had been a long-simmering situation of inequality and social disparities. We attended the march to show that there is resiliency in South Los Angeles.  My son held one of the banners of the march. I have a video of him marching and chanting. He is just 8 years old but in 35 years from now when he starts his Presidential campaign I will have this gem that shows his passion for social equality. 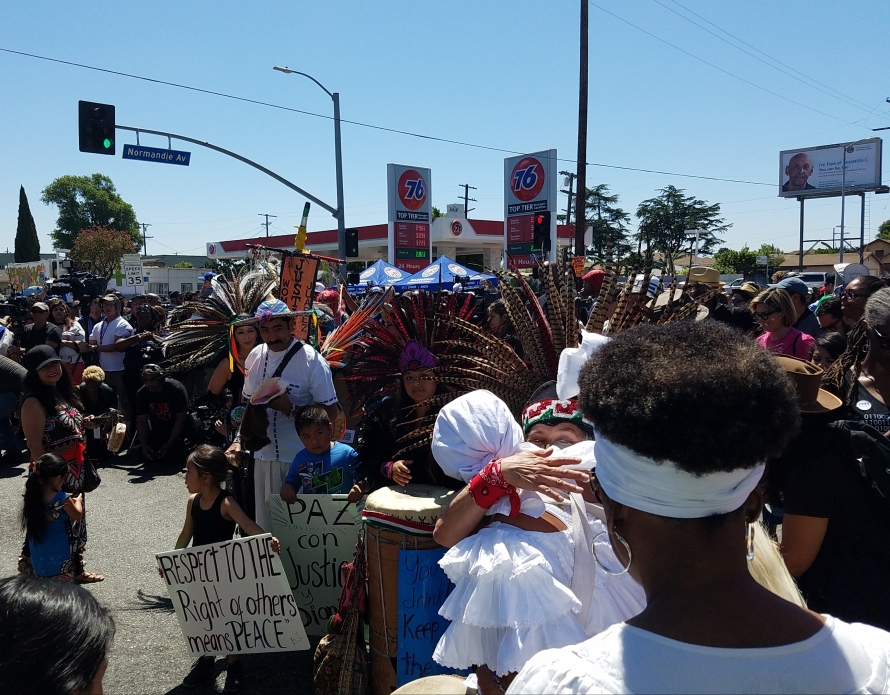 We walked for two hours. I felt so exhilarated by the experience. Also, a bit hot. Considering I don’t drink water I’m impressed I made it without fainting. I did have my coke zero with me and I did give in at the end and drank water. Yikes!
Once we marched, we were parched, hungry and eager to sit. We then went to a carnival with a beautiful heart and soul family who took us in with them for the day.  Our kids hung out laughing, running and throwing darts. Let me note, they didn’t run and throw darts at the same time.  I was not that heat-stroked. My son became wildly enamored of the giant slide.

My son was a community activist in the morning and a happy-go-lucky kid in the afternoon.  I couldn’t be happier at the fact that he gets to experience such a full life spectrum so early in life.  From a march in the am to a carnival in the pm. A day in Los Angeles.  May we have many more like these. In gratitude to all that helped it happen.