For the love of architecture in my travels

One of the things I love most about travel is architecture. Now, I understand that sounds rather abstract. I love trying to understand how building structure mirrors the values of the particular society in which they are located.  Many years ago, along with art history lasses, I took a class on the architecture in utopian societies. Everything from the fantasy realm to the world of the Shakers in New England.  It all goes back to form follows function but form also dictates the societal level function of people. Does that make sense? Maybe. Maybe not. I haven’t head nearly enough coffee yet.

One form I find fascinating is the dome. In the San Francisco area, I have come across several dome houses that people built perhaps in the mid-70s. However, apparently dome houses are making a comeback and might just be the next big thing. Besides dome houses, I just like looking at dome buildings. There is some kinds of “mad max” quality to them that gets me daydreaming of futuristic worlds. I often try to imagine how one would sale up a dome. This is what happens to my mind when it is not working. Oh boy.

Besides dome homes, I also like wacky, crazy homes that just do not seem to belong. In the city of San Jose, California there is a historical landmark called the Winchester Mystery House.  It may be haunted due to the many servants and workers that once walked through the halls of the house and also due to the fact that the widow Mrs Manchester, thought nearly a hundred years ago, that she would be forever haunted by the fact that her family had produced the winchester guns. To appease her guilt and superstitions, she had her house built and then continuously built until she died.  There were stairs and doors to nowhere that wrapped around the house in odd ways. She just kept building and building more parts to the house. Certainly many ghosts must have been confused and lost at one point in their hauntings. 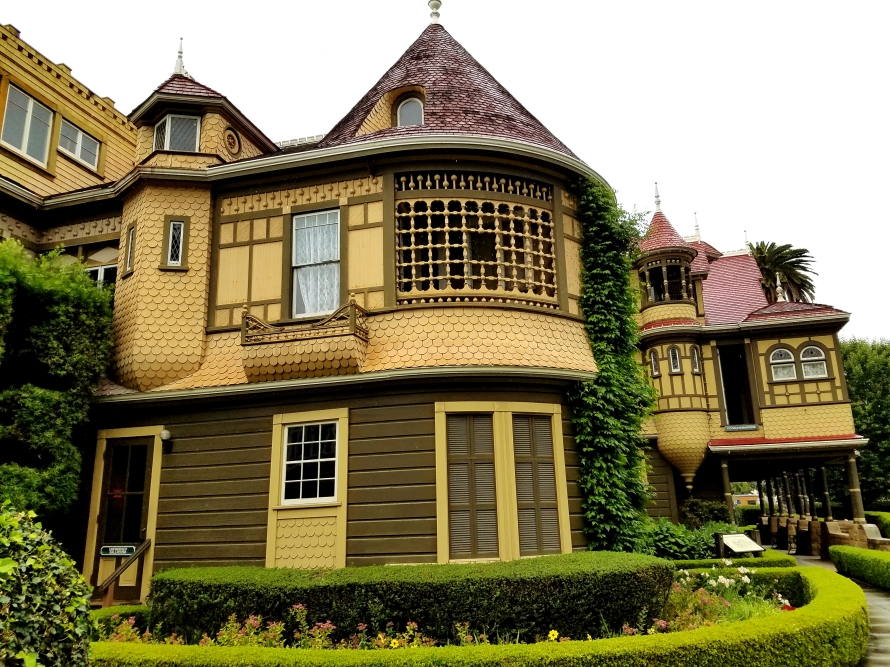 Walking through the Winchester House I felt like I was trapped in a giant dollhouse. Growing up I dreamt of living in either a giant dollhouse or a church, as my dilapidated apartment building in the South Bronx left much to be desired.  I am not too sure, however, I would want to keep building and building. At some point, a place one calls home, needs to be completed for ease of mind and being.

As a New Yorker, the skyscraper is a thing of beauty to me. I love seeing a skyscraper filled landscape at night. I have always noted that New York is a city meant to be experience at night and that is due partly to the beautifully lit skyline. Now Los Angeles is starting to get in on that action.  I just hope they are all built very sturdily to withstand that “big one” earthquake that many promise (warn) will be coming very soon.  Till then and for now, I love to see those tall buildings lit up for the evening sky.