Toronto is a truly lovely city at least in the summertime when I was just there.  I should back up and state for the record I love Canada. It serves as a the calm, safe and slightly cheaper sister to the US. I have done a cross-country trip through Canada. I have been to Vancouver several times and have enjoyed the french snobbery of Montreal. I have always felt safe and welcomed in Canada. As a Hispanic, brown-skinned woman, I have often been looked at, sneered at and had my identity questioned while abroad.  Such situations have not scared me off from traveling. As a matter of fact, I travel more and more. I will not let other’s discomfort with me as a human get in the way of experiencing the world.

What I have loved about Canada is that I do not get those looks that I receive elsewhere. I was in Vancouver three weeks ago and I found it to be filled with people from all walks and looks of life. In this day and age we tend to not want to blend in with the crowd, but I must note that it was nice to just blend in with the crowd.  I never once stood out. I can laugh and be happy at that. Then two weeks later I went to Toronto. It was my first time. As a New Yorker, i had always wanted to go to Toronto. It is just about a 10 hour drive away if you take into consideration the border crossing time. It is close!  My gay friends have also talked about how great Toronto is.  Which I take to be an indicator of how accepting a city is.  Thus, I wanted to see how I would be treated as a Hispanic. Alas, I never made it to Toronto from New York. Ironically, I had to move out to San Francisco in order to get the opportunity to fly to Toronto for work.

I was there during the American Psychological Association conference. I didn’t hold that against the city. It’s a joke about psychologists. Ok?  But seriously do you ever want to be in a city in which 7,000 psychologists or more have descended upon? I know I don’t. Anyway, moving on from that rant and refocusing on the beauty and charm of Toronto. The area of my hotel was basically the equivalent of the United nations. Thee was so much diversity and everywhere.  The restaurants ranged the full spectrum of culinary tastes.

One day, despite there being a subway system that appears to be extensive, we decided to walk and walk and walk. By the end of the day, the pedometer on my phone advised me I had taken 29,767 steps that day.  During that day we came across various types of street art, great food trucks, a snazzy shopping area, a free concert in celebration of those competing in the Parapan Am Games and a ton of wonderful bars serving great cocktails. Not once was I looked at funny. people were welcoming. We found a little Portugal and Brazil area where a restaurant featured a drink named after the great Salsa singer Celia Cruz that was idolized by my family growing up. Also, while walking those 29,767 steps we always felt safe-even when it was pitch dark outside. Hooray for Toronto. Now mind you, people did warn us that when winter hits there may be less people walking about.  After experiencing part of last year’s horrific winter in new York, I think I will stick to seeing Toronto in the summertime.

Here a few of my favorite sites… 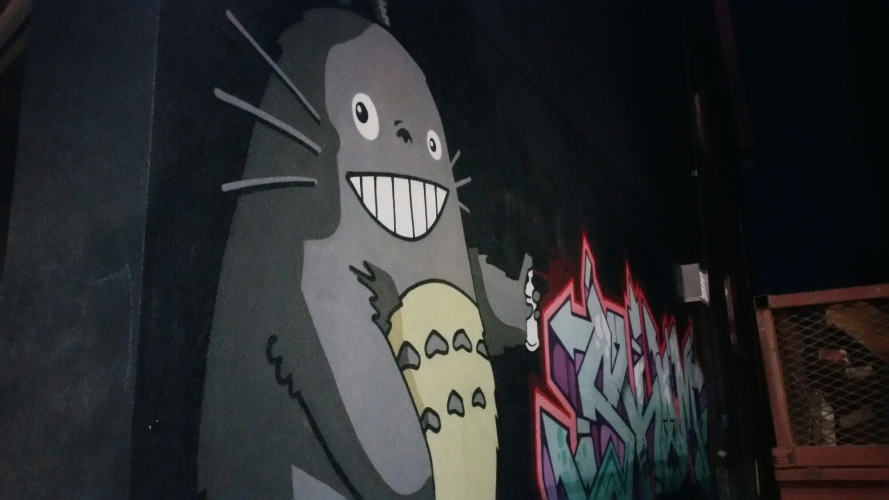