Tasting the ring of fire and sugar in Panama

The ring of fire and sugar in Panama 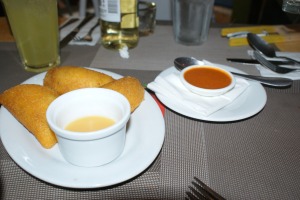 Growing up in a Puerto Rican household meant I ate tons of garlic-laden food, but barely any spicy food. Mexican food was not popular in my neighborhood. Chinese food was but it was the kind that made barbecue chicken wings. Somehow, despite that background, I grew up loving spicy food. No, let me clarify. I crave and yearn for spicy food. My favorite cuisines include Indian, Ethiopian and Mexican. The spicier the food, the better. And for the most part my closest friends love spicy food as well. For me, and actually many psychological assessments, willingness to eat spicy foods (or new foods) shows a degree of “openness.” As someone who has lived abroad, traveled extensively and has ostensibly lived on her own from an early age, openness to new experiences, food, and people has been crucial to my success and survival.

As I planned for my recently completed Panama trip, I envisioned eating many sweets and absolutely no spicy food. I thought that as part of South American or Hispanic cuisine the food in Panama would be all garlic and no fire. I was wrong. Happily, I was wrong.

We arrived late thursday night into Panama and ventured out early on Good Friday. We came across religious processions and many closed businesses from the outset that Friday morning. Immediately, I realized we were in a very heavily catholic country. It felt familiar. As we walked the city I recalled how quiet Good Fridays were in my apartment and neighborhood growing up. Yes, Panama felt very familiar.

We made our way to the “casco viejo” the old neighborhood and world heritage site in Panama City. We wandered dripping in sweat. We started to get major pangs of hunger and not much was open. We finally came across a local restaurant that was open. We got settled in. I immediately asked for a mojito. The waiter looked at me with sad eyes letting me know I couldn’t get one. I didn’t understand. I then asked for wine or beer. Nope, can’t do it, he stated. He walked away. I frowned and started talking with some locals who pegged me as a Nuyorican. He returned and I asked again. He then came close in and whispered that it was good friday and liquor sales were banned in the country on said day. He then stated he would give me two mojitos but I would have to work out an under-the-table payment as it could not show up on any bill. Sold! When it came, I was ecstatic. It was the best tasting mojito ever. It was extremely sweet and it was contraband. Nothing could taste better.

Then our food came. Our empanadas delightfully came with an extremely spicy sauce. Unbelievable. It was fiery! It was tasty! The next day, I ordered at a different restaurant pork chops in mayacuya sauce (passionfruit) which was sweet with a bit of a spicy kick to it. I was flabbergasted. I had expected sweets in Panama but no spice. Happily there was spice. Surprisingly, desserts were not all that grand and as such I stayed away from the, for the most part. Thereafter, we traveled out of Panama City into the valley and went into an extremely small local restaurant where we ate fabulous empanadas with a delightful spicy sauce that we asked for more of. Then we took their newly inaugurated metro system that took us to some neighborhoods most other tourists do not venture out towards. There we were served our meal with some inquisitive eyes. They were clearly not used to tourists. I them called the waitress over and asked if we could have the accompanying spicy sauce. She smiled somewhat surprised and brought us back little saucers filled with spice. We knew the secret and it paid off handsomely.

Over and over again, we sampled the spicy way of Panamanian life. There was much sweetness with the meals, namely the passionfruit sauces and coconut rice. However, despite my preconceived Puerto Rican notions, there was much spice to be had in Panama. The Casco Viejo is now enveloped within a a causeway ring. To my delight that ring is dotted with many restaurants that serve up that special spicy, at times fiery, sauce. Panama is a transcontinental country. I have been lucky to visit several transcontinental countries (Egypt, Curacao). I have been even more lucky to have been surprised and delighted by the interesting mixed cuisine nature of said countries. Panama, as a transcontinental country, has an eclectic mix of people who go through and who have settled down therein. That mix right there leads to an interesting spice of atmosphere and cuisine.

Bring on the spice!

Inspired by Panama and the daily prompt

Other thoughts on sweets

Chronicles of an anglo swiss

Spicy food is the way to go